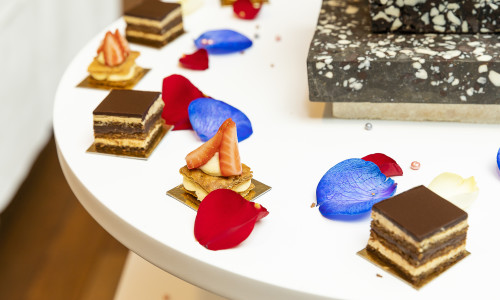 Vancouver, BC – October 8, 2019– For only the second time in the 43 year history of the event, Canada was selected to host the prestigious 43rd Concours International des Jeunes Chefs (Young Chefs) Rôtisseurs Competition. It was fitting therefore that Canada’s own Darnell Banman of the Winnipeg Squash Racquet Club took home the Gold Medal of la Chaîne des Rôtisseurs and the Arthur Bolli Memorial Trophy at the Competition held in Calgary, Alberta on September 20, 2019. The competition, open to young cooks under the age of 27, was hosted and sponsored by La Chaine des Rôtisseurs. Additional sponsors include Cordon Bleu (France), Chef's Hat (Canada) and Southern Alberta Institute of Technology (SAIT) School of Hospitality and Tourism.

The competition has a long and storied history, having first been organized in 1977 in Switzerland to support and promote future young chefs. Forty-three years later, it still provides each young competitor with a week of educational culinary experiences, and the opportunity to demonstrate their skills in a competitive environment with their peers, showcasing their talents and creativity in an international arena.

A panel of 12 internationally certified chefs, all members of the Chaine des Rôtisseurs, judged the competition, awarding marks for taste, presentation, originality and kitchen technique. As the Gold Medalist, Darnell received a first place prize of a Superior Cuisine training course at Le Cordon Bleu Paris, sponsored by le Cordon Bleu and the Chaine des Rôtisseurs; and an executive chef attaché case with a complete set of professional knives, sponsored by Wüsthof. He also received a set of professional Wüsthof carving knives for his exceptional skills and organization in the kitchen during the competition

Each competitor was given four and one-half total hours in which to compose a menu and prepare a three-course meal for four persons using ingredients presented in a “black box”. This year’s black box included four proteins with one (Fresh Pickerel - 1 kg. whole) released to the competitors 2 months in advance. Compulsory ingredients this year also included 4 whole quail, 12 raw spot prawns, beef tri-tip/coulotte 1.5kg,, 2 whole acorn squash, 2 whole zucchini, frozen Saskatoon berries 500gm., 4 fresh peaches, honey 120gm. and beluga lentils 300gm. Contestants are required to use at least 50% of each of the above mentioned items and could compliment them from a large array of non-mandatory items. The competition allows the young chefs 30 minutes to write their menu then 3.5 hours to their first course followed by 15 minutes until their main and a final 15 minutes to their dessert.

Darnell created a menu consisting of:

• Appetizer: Layered Pickerel Bar with Prawn Mousseline, Puffed Skin, Pickle Shallots, Zucchini, Served with Sauce Beurre Blanc
• Main Course: Beef Tri Tip Pan Roasted, Served with Butter Poached Quail, Beluga Lentils, Crispy Potato Cannoli, and Jus
• Dessert: Dark Chocolate Mousse, Lemon Thyme Sable, Honey, Acorn Squash, Poached Saskatoon Berries, Peach Gel
About Darnell Banman
Originally from Winkler Manitoba. Darnell lived there until he was 19 years old. Growing up, he didn’t really know what he wanted to do after graduation from high school. At age 15, he took a job as a dishwasher at the local golf course in Winkler called Mulligans, his first real exposure to food preparation. As time went on, he became more and more involved on line there and decided that he wanted to pursue a career in culinary arts. This lead to a move to Winnipeg to study at Red River College.

Shortly after moving to Winnipeg, he was hired at the St. Charles Golf & Country club, working under Executive Chef Takashi Murakami, CM for over five years. As Darnell put it, this is where he first became interested in the possibility of competing “because Chef Takashi was always so involved with the Chaine, my coworkers and I were constantly exposed to the competition. I would watch my coworkers train and compete and win time and time again, which inspired me to join in”. During his time at St Charles, Darnell spent several years as the dining room chef where he was able to have explore his creativity and grow individually by sharing his own ideas in preparing the dining room menu - putting his own spin on things.

In no small part, Darnell is quick to thank Chef Murakami as instrumental in his winning the best kitchen score award at both the National and International Competitions. “Working under Takashi Murakami when I first moved to Winnipeg gave me a strong foundation when it came down to work efficiency, cleanliness, and professionalism in the kitchen. Chef Murakami had such a strong work ethic that he inspired me to take pride in my work and my work space. He also played a big role in inspiring me when we would sit down for staff meals. I was always asking him question after question regarding his involvement with Culinary Team Canada. He was always ready to share everything he knew with us and relayed his experiences through many photos. Eventually I was introduced to la Chaîne des Rôtisseurs through him and everything just took off from there.”

Darnell moved to the Winnipeg Squash Racquet Club as Executive Sous Chef over the last year, working under Cameron Huley. The support and encouragement Darnell received continued at the Club. “Chef Huley has been a member of Culinary Team Canada for 10 years and has also been involved with the Bocuse d’Or. Having his influence, experience and guidance along this journey in the past year, along with everyone else, was super helpful in preparing for the competition”.

Darnell was “also super excited and grateful to have the opportunity to train at various restaurants across Canada. It was a great experience to represent Canada in our own country although it was also really nerve racking. Having to compete against other talented chefs from around the world is something that is really difficult to prepare for.” It was always in the back of my mind - what can guy like me from Winnipeg Manitoba bring or do in this competition that can set me apart? You have almost all of the rest of the world showing up, who always seem to be one step ahead of you with trends and their excellent reputation in the culinary world. To help me prepare, Chef Huley planned 2 black box trials a month coming up to this competition. He would gather the ingredients he thought would me most beneficial to my growth. There was always a panel of Chefs who volunteered their time to taste and critique my plates and put me on the path. Some days were amazing, others were quite terrible to be honest”.

His favourite course to prepare is dessert “because you can be creative with the colors and textures in the plate. It is also one of the hardest courses to perfect so there is always a way to make it better. For example, one thing I had been practicing intensively prior to Nationals was tempering chocolate. It is difficult to do but I think that that makes it fun. I enjoy challenging myself and learning new techniques to practice and perfect”.

Darnell is also no stranger to adversity in culinary events as, prior to winning the 2018 Canadian National competition, he had competed four times in the regional Manitoba competition, finally winning at that level in 2017. He then went on to the Nationals in Ottawa last year. Despite winning best kitchen score that year, he was unable to win the Gold Medal – a challenge he has met in 2018 Nationally and now in 2019, Internationally.

Darnell has a very clear idea on how he approaches competitions. “My strategy when competing is to have a game plan and to follow it, which can be hard considering that a black box is always a surprise. I just try to be confident in what I know and to utilize it to the best of my abilities. Another strategy that I find is important for me when I am competing is to prepare for the worst. Some of my competitors at the past Nationals in Edmonton last year were joking with me that my set up was a bit over the top, which it was! I brought as much as I could with me because it’s a new work space. I’m not familiar with it and I don’t want to have to spend time looking for kitchen supplies. I just bring everything I can with me so that I know where my equipment is, and I know how it works. This makes me feel more at ease when competing because it is one less thing to worry about and it allows me to maximize the time I spend on my food”.

He is no less clear on where he sees himself in his future. “I’ll always continue to train and learn and give back as much as I can, as so many other chefs have done for me in Winnipeg. I love being involved with la Chaîne des Rôtisseurs and hope to have my own ‘Chaîne Dinner’ in the future where I can have the opportunity to share my story and menu”

About La Chaîne des Rôtisseurs
The Chaîne des Rôtisseurs is an international gastronomic society devoted to promoting fine dining and preserving the camaraderie and pleasures of the table. The society has both non-professional “gastronome” and culinary professional members in more than 75 countries around the world. For more information on the society in Canada and internationally, please visit the website at canada.chainedesrotisseurs.com.